Today I finally took some time to check out the recent update to the App Hub. I have to say, Microsoft deserves some credits here. A lot of annoyances that existed before have been fixed. Still there’s some work left to be done. The biggest question: What happened to worldwide distribution? So let’s take a look at the improvements first. Most of them have been covered extensively on blogs and twitter during the last few days: – Overall improved UI – More detailed reports that finally include excel export – Crash counts, very useful addition! – Editing of app metadata without resubmission – Beta distribution of apps If you are looking for more information on the improvements to the App Hub please check out the blog post published by Todd Brix today.

One of the biggest improvements that comes with this update is the addition of 19 new consumer markets. Those 19 countries will finally get their own marketplace with the Mango update. As a developer this is good news, since a bigger market means a bigger opportunity to gain app users and income. This is also pointed out by Todd Brix in his post:

As you can see we’ve acted on your input and continue to improve and expand the Marketplace opportunity and experience for developers and consumers alike.

None of my apps are restricted to a certain locati0n so I chose to distribute my apps worldwide from day one. As most of you probably recall the old App Hub featured a nice checkbox that made sure an app got published worldwide. 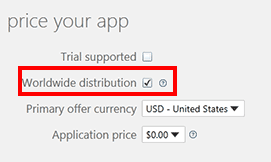 I assumed that enabling this would also ensure distribution to new marketplaces later on. Unfortunately Microsoft thinks different:

As a developer this means I have to go through all my apps one by one to reconfirm that my apps should be published worldwide. It’s not a big deal, but still it’s annoying. I already clearly indicated that I wanted my apps to be available worldwide, so nothing is stopping Microsoft from automating this process. Furthermore a new marketplace means new top lists and ratings. If you took a few weeks off to enjoy a nice vacation you might run into this too late and lose your shot. If you look at this from a consumer perspective it’s even worse. I am very happy that the Netherlands will finally get it’s own marketplace with over 23.000 apps. Unfortunately part of this 23.000 will probably never be available because developers won’t execute the procedure described above. After going through all this info one question remains: Why would Microsoft limit the distribution of apps that had already been cleared for worldwide distribution by their developers/publishers? I can’t think of any valid reason, so please let me know if you do. In his comment on Todd Brix’ blogpost Patrik Patrik Jonsson already pointed out the problem that we will probably have to get used to as consumers in any of the newly added countries:

Today I reset my phone after having read this but I still can’t install most apps, “this application is not available in your region”. I can’t even find the apps I used to have, probably because they have not been targeted for Sweden yet.

Please Microsoft, do something about this!